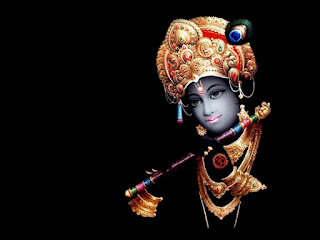 Today is Krishna's birthday and the atmosphere in Mumbai makes one realize that it is a special day. There is lot of energy in the air due to the Govindas who would be traveling the length and width of Mumbai and its suburbs for the Dahi Handi festival. Huge sum of money is waiting to be won by the Govindas for breaking the handis (clay pots) hung at great heights. Some as high as 9 or 10 tier high. It is exciting to watch the human pyramids being built and on few occasions you feel your heart popping out when you see the human pyramids fall like pack of cards.

Krishna's birthday may have been commercialized and politicized these days but his teachings has stood the test of time. He is the most practical God. Even a non-believer will not be able to counter the Law of Karma as it is something even science talks about. Cause and effect is a universal phenomenon. A believer talks about Law of Karma while a non-believer understands Newton's third law of motion. Krishna does not want one to denounce the world. He does not want to restrict anyone yet he wants everyone to understand that action will have to be taken and the effects of the action will have to be borne. There is no running away. The ultimate aim of action matters more than the means of achieving it.

Krishna does not impose rules to bind you. He in fact even encouraged Arjuna to break some rules and overcome limitations to fight a righteous war. When you are fighting an enemy who does not follow rules, sticking to rules will not help. As long as the ultimate goal is good, the means used to achieve it should not be fretted upon. Krishna is all about focusing the mind. Arjuna, the best archer of his times was in self-doubt and his hands were getting numb at the idea of fighting his own relatives. Krishna was able to give him clarity of purpose and that one pointed focus which was necessary to win. To know what you are here to achieve in life is the first step towards attaining it. Krishna was able to give that knowledge to Arjuna who did not look back after receiving words of wisdom.

Krishna taught us that meditation need not be done by sitting idle in one place. If action is taken without any emotional attachment for the outcome of the action, it is meditation. When you can handle both success and failure with equanimity, you are in a meditative state. Life becomes a journey in meditation.