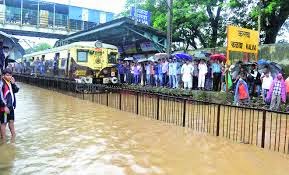 Monsoon was playing hide and seek with Mumbai until yesterday. Everyone was desperately waiting for it to rain. It was late by over 15 days but when it rained it poured. First real monsoon showers of this season had a big impact on Mumbai. Traffic jams, Trains were stopped dead on the tracks, people inconvenienced and yet Mumbai did not stop. It seems Metro trains first tryst with monsoon was not good. It had water leaking through the roof through the air conditioning duct. Despite all the adversities, the show must go on attitude of the people of Mumbai is commendable. Yes, everyone cribs about the inconvenience but still they do not give up. Trains may not be running but I did not see many people leaving the railway stations. Everyone was eagerly waiting for train services to resume. Mumbai has a love-hate relationship with rains. We beg for rains and when it rains we complain about all the hassles that we have to go through. Yet I feel that we still are a better lot in dealing with all the troubles and come out smiling.

Yesterday the day began as any normal day. Though light showers were happening it wasn’t raining that heavily until about 11-11:30 am. After that it started to rain non-stop. I reached the railway station and realized that due to some technical snag in the signaling system near Kurla railway station, trains were not plying. Luckily one train arrived after about 30-45 minutes of waiting which allowed me to reach Thane station from Ulhasnagar. However, I had to go beyond that and my only hope was that trains would start running by the time I reached Thane. This did not happen. I had to wait for about 30 minutes and when a train for Mumbai-CST arrived, it was packed to the point that you could not find space to even place your toe. I had to let go that train. I thought there would be few more trains to follow. Being optimistic doesn’t help always. Though there were many trains going in the opposite direction there wasn’t any heading towards Mumbai CST for quite some time since I decided to not board the earlier train that was packed to full capacity. Soon I learnt that patience does help. After a long wait, a train starting from Thane station, heading to Dadar arrived and I boarded it. Since it was starting from Thane, the situation was not as bad as the earlier train.

I managed to reach office yesterday and felt as if I had won a battle.
Posted by Vijit at 4:47 PM No comments: Links to this post