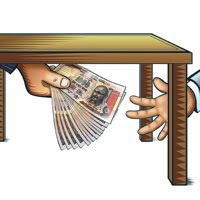 I think this will be one of the oldest recipes. No other recipe could beat this one for age. It should also be the simplest recipes. Though it has been the oldest and the simplest, it has still not become obsolete.
Do you guys still want me to get into the details? Haven’t you all known this for years now? Ok, this one is for guys who suffer from short term memory loss. The simplest and oldest recipe for corruption is the following:
“Give responsibility without accountability”
Yes, you don’t require more ingredients for creating corruption. One who tastes it spreads it and hence preparing it in small quantity would be enough to satisfy the taste buds of hundreds and thousands. Also it is the only dish that gets served under the table.
We have been observing corruption around us from time immemorial. Right from the top level in an organization to the lowest, corruption exists in so many different forms. The recipe remains same yet we get to see variety. The outer body changes but the core remains the same.
This monsoon I saw the condition of the roads and asked myself this question. Is this why I pay taxes? I know if I point finger towards one organization for the condition of the roads, they in turn will point it to some other organization and it will be a never ending chain. The run up to the common wealth games is also proof of giving responsibility without accountability. Multiple organizations are responsible for one event, yet no accountability. This is exactly the issue. There is not a single organization or individual who is accountable and hence corruption rules. Let me come back to the condition of the roads as that is something very basic and corruption in organization of common wealth games is too big an issue for a common man like me. I strongly feel the need that every stretch of road should be maintained by one single organization and they should be held accountable for the condition of that stretch. The person sitting at the top level of this organization should be the person responsible and accountable for it. This is the only way to ensure that roads stay in good condition.
Until we see responsibility and accountability becoming two sides of the same coin we just can’t expect corruption to become history. I know it already has a history but I hope our future generation only sees it in their history books and not current affairs.
Posted by Vijit at 12:48 AM No comments: