Indians are world champions yet again 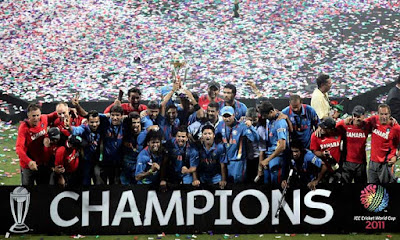 20-20 World champions, No.1 Test team and now one day international world champions for the second time, what more can you ask for? Before the match started I had received a sms indicating that the match was fixed. I ignored it initially. But looking at the Srilankan score and the way Sehwag got out early I somehow suspected that things were going as mentioned in the sms. However, after the match I felt guilty for suspecting our Indian team. If after fixing the match it could be made so interesting then I wish every match gets fixed. 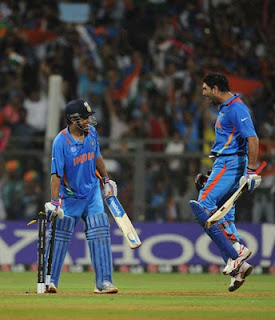 Indians played like true champions to chase a target of 275. Sachin and Sehwag got out early and all hopes were lost. Gautam and Virat steadied the innings. Then captain cool Dhoni arrived at the crease, ahead of Yuvraj once Virat lost his wicket. He along with Gautam laid the foundation of Indian Victory. Gautam got out and Yuvraj stepped in. Both Yuvraj and Dhoni finished off the match in style. Dhoni was adjudged man of the match and Yuvraj the man of the tournament. It was a great sight to see them together in the middle winning it for us.
Everyone had written off India after looking at the way they played the league matches. They were pitted against the mighty Australians in the Quarter Final. Though every Indian would have been happy about the fact that India made it to the Quarter Final, no one would have imagined that they would win against the Aussies. The win against Australia is what turned things around for the Indian team in the World Cup. Pakistan’s history against India in the world cup was poor. History repeated itself this time around too and India defeated arch rivals Pakistan in the semifinal match to reach the Finals to have a face off with the Srilankans. I personally had this belief that winning against the Srilankans would have been very difficult especially once India lost the toss. In a world cup final, the team chasing has by and large always lost the match. Also, a target of 275 to chase in a world cup final seemed like a tough ask. But Dhoni and his team proved to the world that they can do it and they did it in a commanding manner too.

Not to forget Coach Gary Kirsten who too has been instrumental in this victory of ours. It is sad that he is no longer going to be with our Indian team. I wish he could have continued the good work for us. After the match was over, he and Sachin were lifted by the Indian players on top of their shoulders and rallied around the stadium.

It was a great sight to see Sachin smiling like a small kid. A commentator interviewing Virat Kohli asked him about carrying Sachin on top of their shoulders to which Virat gave an apt reply. He said that Sachin has been carrying the burden of Indian cricket on his shoulders for 21 years and it was now their turn to lift him on their shoulders. This shows the amount of respect that the Indian team has for Sachin. Being part of a World cup winning side must have been a long cherished dream for this greatest cricket player of all times. I am very glad to see that his dream got fulfilled today. 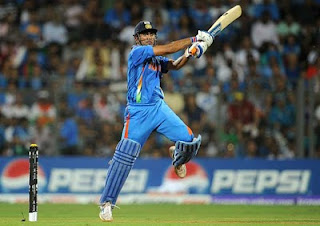 I wish Captain Dhoni starts a coaching class for leadership training. He is a great leader who leads from the front and a great example to follow. The whole world questioned so many of his decisions and yet he delivered not by words but by actions. The media was so critical of him and yet he kept his cool. He was brave enough to admit the mistakes he made, which is again a sign of a great leader. I am sure the media will be all praise for him now that he has taken India to victory. He saved his best for the last and he truly deserved the man of the match award. It was great to see him lift the World cup.

I thank team India for giving us this great moment of joy. It was nice to enjoy every moment of India's run chase along with my friends. I will cherish this for a long long time to come.

Posted by Vijit at 3:25 AM No comments: Links to this post