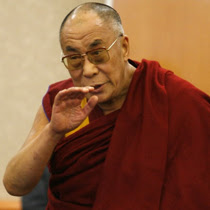 The Federal Cabinet secretary K. M . Chandrashekar in his letter to the ministers directed against being part of the function organized by the Gandhi Peace Foundation and the All India Parliamentary Forum for Tibet to honour the Tibetan spiritual leader, Dalai Lama. The reason being that it is not in conformity to the government's foreign policy.

One of the prime reasons the Left parties are opposing the Indo-US nuclear deal is to ensure that another nation (US) does not have influence on India's foreign policy. However, the decision to ensure that ministers of Indian Government are not part of a function to honour Dalai Lama, the goverment was trying to please China. Is this not allowing a foreign nation to have influence on our foreign policy? Is this what the left parties mean by independent foreign policy? The Left parties are all for pro China government policies just because of the fact that a communist government is ruling there. I have nothing against China. I feel that India should not become a tail wagging pet. Neither for the US nor for China. The government of India has again succumbed to the blackmailing tactics of the Left parties. This was what I feared would happen.

I would like to see a powerful India which demands what it rightly needs for development. Hence, if the Indo-US nuclear deal would help us develop we should go for it, unlike the Left parties who have a narrow minded approach towards the deal.

Similarly, why should India say or do things to please any country. Why should it fear China? We are not hostile towards China. We should continue developing good trade relations with China without compromising on India's right to take it's own decisions.

Posted by Vijit at 10:40 PM No comments: Links to this post