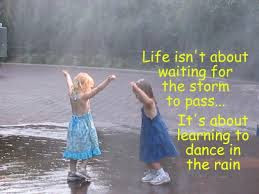 The idea of writing this blog post came to my mind after I observed my daughter have fun in the rain. In the past also I have written about how kids can teach us things.

Rains in Mumbai can cause lot of frustration. Last Friday was one such rainy day. The cooling effect that rains bring got neutralized by the annoyance caused due to train services being cancelled and long traffic jams. People heading for work got stuck mid-way and some were not even in a position to abort journey and go back home. Those who somehow managed to reach office were left wondering how they will reach home in the evening.

My story was not too different from the average Mumbaite. I decided to take a bus instead of opting for the usual train journey as I was cautioned by one of my friend that trains were not plying due to water logging in the tracks. It was a good idea after all. I managed to reach office even though I was late. News channels and social media were abuzz with news about the rains and how the administration had failed to ensure that rains do not play spoil sport. Facebook and Whatsapp users were posting hilarious messages about the whole episode and some were posting images about the areas where they were stuck due to traffic snarls caused due to heavy rains.

Reaching office was just half the battle won. Managing to go back home in the evening was what everyone was thinking about. In the evening I left early along with one of my office colleagues who had brought his car to work. Luckily the return journey wasn’t that rough for me.

It was still raining when I picked up my daughter from the day care, helped her get into the rain coat and was heading towards my bike that was parked at some distance.  Even before wearing the rain coat she was excited to go out in the rain and I had somehow managed to stop her. After wearing the rain coat though she just cut lose from my grip and was laughing and dancing in the rain. Looking at her enjoy the rains I was wondering whether we grown-ups can ever savor such moments. It did not matter to my little doll whether rains have caused frustration or inconvenience to anyone. For her rain just meant fun and nothing else. A small puddle of water that we would try to dodge is what she ensured that she didn’t miss jumping into. If she did miss one she would go back, jump into it and then move forward again.

Ignorance is bliss, isn’t it?