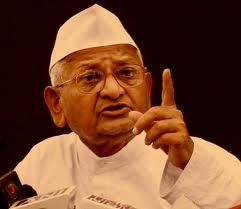 I have a friend in Facebook who is consistently posting comments criticizing every move of Anna Hazare and I am not able to make sense of it. He doesn't like his crusade against the Congress. He feels that Anna is targeting Congress only. May be he is a big time Congress supporter. I do not think even if he is a Congress supporter, he should hate Anna. Even if he hates Anna, he can still stand against corruption or support a movement to root out corruption.

Just for a moment let us all believe that Anna Hazare is the most corrupt person in the whole world and his team too is involved neck deep in corruption. Now if this is really true, then he should definitely be eligible to feature in the Guinness book of world records. You will ask me, why? Show me one person in the entire world who is a thief and is fighting hard to bring a law to punish thieves. So, if Anna is corrupt and still fighting hard against corruption, then he should definitely get recognition for this.

Every political party in this country is corrupt. There is no party out there whom we can single out and say that it is free of corruption. Anna is targeting Congress right now. I do not see anything wrong in this. Most scams have happened during Congress rule. The biggest scams of recent times have the involvement of the Congress government. So, what is wrong if Congress is targeted? Moreover, the Congress party had tried to suppress and oppress a peaceful agitation. If they were clean, why should they fear one man? Why they tried hard to malign Anna’s image when he was on a fast unto death? If Congress had any credibility then they should have fought a battle on principles rather than stooping low and make false allegations against Anna. One of the Congress spokesperson later on had apologized for insulting him. This indicates how much apprehension the Congressmen have in their minds for Anna Hazare. I have not seen such a confused Prime Minister since I started following politics.

Whether you hate Anna or love Anna or just admire him. I have a simple statement to make here. The man is not important; it is the mission that matters. Do not support Anna Hazare if you do not wish to but what stops you from fighting for a strong law against corruption. With or without Anna, a strong law against corruption is the need of the hour. Let us unite and fight for it.

I think everyone agrees that corruption must go. And perhaps it is true that Anna Hazare (and entire his team) is not corrupt.

That said, his notion of dealing with this issue is wrong, and that is what everyone (who doesn't like him) is opposing.

This idea of us being a democracy, the sanctity of the parliament is deep rooted in our minds. Once you show people that democracy and parliament can be taken hostage, and rules can be bent and broken - that is exactly what they'll do.

Even if we think Anna is noble in his cause, if he shows this way to the people, others might not use it for right purposes. And IMHO, I have serious doubts on the intentions of the Anna team too.

he spent 81 lakhs for his 1st fast at jantar mantar..all u need is a lemon juice to break the fast and even if u serve the thousands gathered there it wud not cost 81 lakhs and moreover wenever sum1 interviews him he ll jus say all are corrupt...1st he shud prove all the allegations against him are falase to which he never answers...secondly he shudnt have broken the fast ,instead he shud hav died by fasting which dint happen which clearly shows that he values his life.he has a team which is funded by the organizations from usa n russia jus to disturb the political situation similar to wot had happened in egypt,libya n syria..and there are members in his team who are good and want to remove the root of corruption but are unable to do it coz of the arrogance of anna n some other members

You must admit one thing. The Lokpal bill which was supposed to be table decades ago got discussed in the Parliament because of Anna. Do you think it would have ever happened without the pressure from Anna and his team? Any movement to sustain needs funding. I think you cannot compare Egypt, Libya or Syria with the situation in India. If there are members in Anna's team who want to remove corruption and are being stopped by Anna, they can always part ways with Anna. Nobody is stopping them. I am not a big fan of Anna and his team's decision to start a political party. I feel they should have played the role of being a watch dog and audit the works done by the government.

Anna's team understood the fact that you need to be in the government to expect some change. Realistically speaking, with no power in hand, and by applying Gandhigiri things won't work out in the 21st century.