Kangaroos sent back home by India

Unlike the first semifinal of the first ever 20-20 World Cup played between Pakistan and Newzealand, the second semi final played between India and Australia was a thriller. It was the clash of the titans. Indian captain Mahendra Singh Dhoni won the toss and decided to bat first. It was a wise decision to take because chasing in big matches is not easy at all. Virender Sehwag and Gautam Gambhir started off slowly but steadily. They didn't add runs quickly but they ensured that wickets were intact. 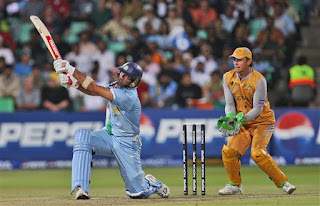 After the exit of the openers the six hitter Yuvraj Singh and Robin Uthappa took charge of the situation. Yuvraj started off from where he left in the match against England. He had hit the fastest fifty ever in any form of the game against England. Six sixes were hit by him in one over of Stuart Broad. In the match against Australia too he started hitting sixes at ease and one of the sixes he hit was the longest by any batsman. The ball travelled 116 metres. Yuvraj scored 70 of just 30 balls. Robin Uthappa gave him good company before getting run out by an accurate throw at the stumps by Andrew Symonds. Dhoni and Rohit Sharma continued the good work and helped India reach a total of 188 runs in 20 overs. Rohit is the youngest player in the Indian team but shows good composure in pressure situations.

The total seemed good enough but when you are facing the mighty Australians you cannot sit back and relax thinking that they won't be able to make it especially when they have Adam Gilchrist and Mathew Hayden as openers. Indians didn't give away too many runs initially. 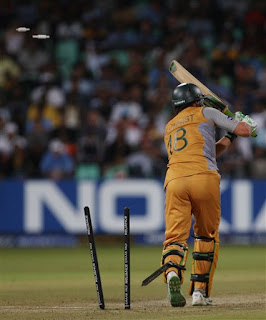 However, the Australians didn't lose any early wickets either. Moreover, both their explosive openers were still at the crease. Adam Gilchrist and Hayden started hitting balls to the boundary and over it. Sreesanth took the wicket of Gilchrist when he was starting to get dangerous. Mathew Hayden and Brad Hodge then scored briskly but he was caught off the bowling of Irfan Pathan. Andrew Symonds joined Mathew Hayden and they both hit sixes and fours. 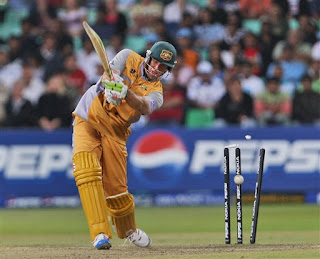 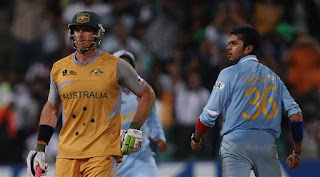 Again it was the turn of Sreesanth to give the break through. He clean bowled Hayden and set the stage for an Indian victory. Mike Hussey joined Symonds and they were inching towards victory. But Irfan Pathan took the wicket of Symonds to slow down things.

Rudra Pratap Singh bowled a nice line too and didn't allow the Aussies to score. Harbhajan took the wicket of Stuart Clarke. Clarke is a dangerous customer too. He can win a match for Australia from any difficult situation. His early exit ensured that Australia didn't get another chance to go for a win. 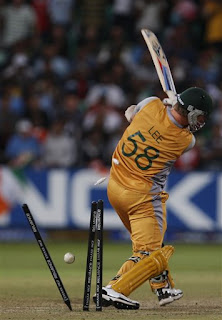 Joginder Singh too bowled nicely. Joginder was bowling yorkers and low full tosses and didn't give too many runs. He clean bowled Brett Lee but India already had the match in it's kitty by then. 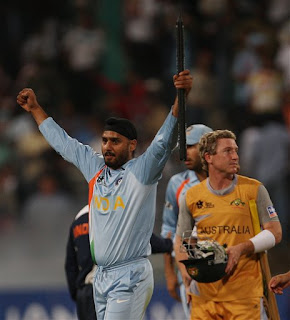 Harbhajan Singh with the stump in his hand after India made it to the Finals of the 20-20 World cup. 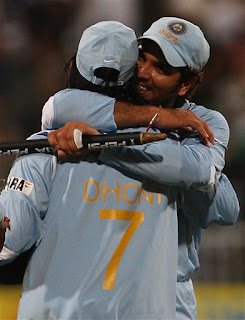 Yuvraj Singh and Dhoni hugging each other after the victory. Yuvraj was awarded the man of the match award for scoring 70 runs of just 30 bowls. 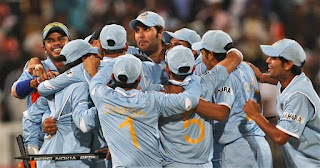 The Indian Team in a huddle celebrating after defeating the 3 time ODI World Cup Champions in the semi-finals of the 20-20 World Cup. They are now looking forward to the Finals against Pakistan and start of as favorites to win the Final after the solid performance against Australia.

Email ThisBlogThis!Share to TwitterShare to FacebookShare to Pinterest
Labels: Cricket