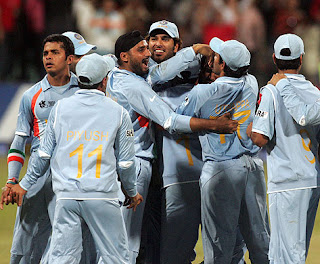 India beat Pakistan to win the first encounter between the two in the 20-20 World Cup. India Pakistan encounters have always been closely fought and it just cannot get better than this. The match was a tie but unlike in other forms of cricket, 20-20 matches now have a way to decide the winner by bowl-out similar to penalty shoot outs in football.
India was put into bat by Shoaib Malik, the captain of Pakistan after winning the toss. India lost four wickets in quick succession. But Robin Uthappa or should I say Robinhood hit few sixes to bring India back into the match. Mahendra Singh Dhoni, the Indian captain for the shorter version of the game too played a solid innings. In the end Irfan Pathan hit few sixes and Ajit Agarkar hit some boundaries and brought India to a respectable total of 141 runs.

Mohammad Asif was the pick of the bowler with 4 wickets for just 18 runs. He was awarded the Man of the match though his efforts were in vain since Pakistan lost the match. 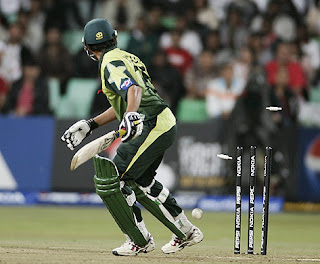 India bowled and fielded well but Pakistan came close to victory. In the last 2 balls, Pakistan needed just 1 run to win. Sreesanth bowled nicely. The first of the last 2 balls was a dot ball. The second ball the batsman ran but was run out and the match was at a tie with both teams on identical scores.

However, a bowl-out was going to decide the outcome of the match. It is similar to penalty shoot out in football. Here 5 bowlers from each team bowls at unguarded stumps and try to hit it. The team with the maximum number of hits out of 5 chances each that they get, wins the match. From India, Virender Sehwag, Harbhajan Singh and Robin Uthappa all were successful in their attempts to hit the stumps.

But from Pakistan, Umar Gul, Yasir Arafat and Shahid Afridi all three missed the stumps and thus Pakistan lost the match. 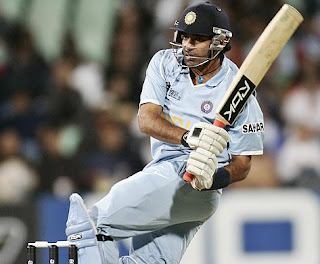 The Hero for India was Robin Uthappa who scored his 50 of just 39 balls. In the end he hit the stumps also in bowl-out to help India win the
match.

India continues to have an unbeaten record against Pakistan in World Cup matches. 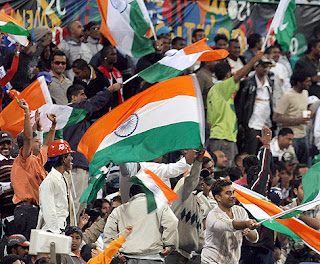 Email ThisBlogThis!Share to TwitterShare to FacebookShare to Pinterest
Labels: Cricket