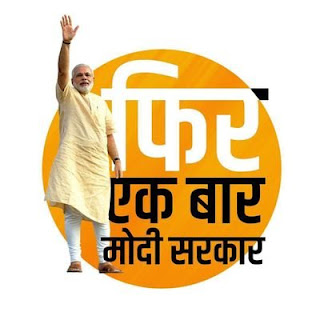 I never thought I would be writing a blog like this today as I had my own doubts about Modi making a comeback. Even though I felt he had a slight edge; I was inclined to believe that the negativity being spread would sink his ship. However, he continues to surprise like always.  History repeats itself and I am writing a blog similar to the one I wrote five year back. More than Modi’s victory, it was defeat of people like Kanhaiya Kumar and Prakash Raj that made me happy. Also, the country rejecting communist ideology was heartening to see. An ideology that does not have any takers in the world due to its failure to uplift people still have takers in a state like Kerala. Here too, this time around people reduced their number to just one. The funny part though is that communist supporters in Kerala are rejoicing about the fact that BJP could not open its account in Kerala. I always refer to the communists of Kerala as frog in the well for this very reason. Even when the entire country has voted for Modi and BJP, the communists think they have reason to celebrate because Kerala did not vote for them.

There was never a doubt in my mind that Modi deserved a second chance because just 5 years was not good enough to judge him. I think a 10 year term is a real time frame for any major transformation to be achieved in a country like India. Also, a true comparison between UPA and NDA can be done when we compare their performances for the same duration.

Now that India has made a wise choice by bringing him back to power, this is my wish list for Modi:

I am of the strong belief that agriculture will be an upcoming sector that will lead to youth empowerment. Everyone is looking forward to eating quality organic food. There is lot of scope for improvement in this area. Technology in agriculture can lead to a food revolution that will help farmers to earn well. A government level push similar to Swachh Bharat Abhiyan should do the trick here. Agriculture should be promoted not just in rural areas but in urban areas too. Terrace gardens and society gardens should be promoted. Schools should encourage and teach agriculture related skills so that kids know how vegetables come into existence. It is very necessary for kids in cities as they hardly get to see the entire process involved in getting the food they eat, on their table. It need not be a grand initiative. Even small baby steps to start with should be good enough.

2. Entrepreneurs to be supported

I do not believe that more government jobs are the way forward. Instead right from school there should be a strong effort from government to encourage skill development that leads to creation of entrepreneurs. Specialized skills should be focused on rather than creating book worms who know all the theory by heart but cannot apply the knowledge in practical sense.

NYAY of Rahul Gandhi would have been a real ANYAY on the people. Doling out freebies like the communist ideology would have converted this nation into a disaster like Venezula. I hope true empowerment of poor is achieved through education.

Infrastructure should continue to be focused on. This typically is always the case with a BJP government. I am hoping this will continue.

Here too Modi has definitely done better than previous governments.  However, there must be renewed focus on ensuring that Pakistan is pressurized further to shut terrorist breeding grounds. Also, expose Pakistan further in front of the world so that it gets isolated more and more.

I wish to end this blog by thanking fellow countrymen to have voted for Modi. At the same time, I do hope and pray that he does not become arrogant like Indira Gandhi. Yes, a strong opposition is needed. In that sense, it hurts to see that Congress does not fit the bill here nor does any other party. A strong opposition is necessary to keep a check on Modi. I truly hope that Congress does some course correction and becomes a truly democratic organization that helps leaders to evolve and take charge instead of relying on dynastic politics.